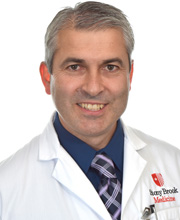 Dr. Nicos Labropoulos is currently a professor of Surgery and Radiology at Stony Brook University Hsopital, Long Island, NY. He is the director of the Vascular Laboratory and has a major interest in pathophysiology, diagnosis and treatment of vascular diseases.

He completed his undergraduate training at the University of London and his PHD and Vascular Fellowship at St. Mary’s Hospital, Imperial College of Science Technology and Medicine, London, UK. Professor Labropoulos is on the editorial board of 11 journals and serves as a reviewer for over 20 medical and surgical journals.

He has been awarded multiple grants for clinical and basic science studies, many prizes in medical and surgical meetings around the world and has been a traveling fellow of the Royal Society of Medicine.

He is actively involved in many national and international vascular and venous societies as well as national committees and accrediting organizations.

He has more than 200 publications, has been cited over 7000 times and he has given over 1000 presentations around the world. He has edited 5 vascular textbooks and has contributed over 55 book chapters on the diagnosis and management of vascular diseases.

He has been working on vascular imaging, aortic wall remodeling, cerebrovascular disease, the development and natural history of chronic venous disorders and venous thromboembolism including the inflammatory pathways in both. He is on the Panel of VTE experts at the Joint Commission and the National Quality Forum and recipient of the Society of Vascular Surgery Presidential Citation Award. He is also actively involved on vascular training and education through many local, national and international organizations. He has organized many local, national and international vascular meetings. He is a co-founder of the International Vascular Foundation, of the Institute of Vascular Diseases and Venous Health Foundation.